How to Test for Cardiovascular Inflammation 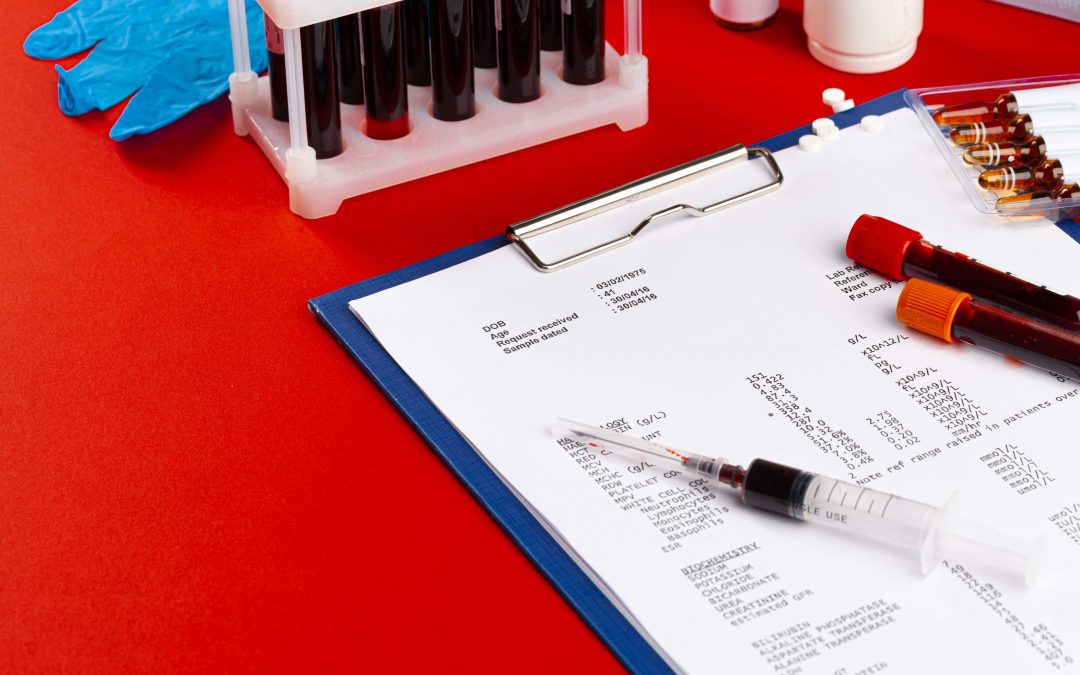 Ridker and his co-researchers started looking at cardiovascular (CV) risk factors associated with old studies, like the Framingham Heart Study and the Ridker-directed JUPITER Trial. CANTOS looks at the effect of canakinumab or Ilaris, an anti-inflammatory shown to decrease heart attack and stroke risk.

Heart attacks and strokes are not so much about LDL but more about CV inflammation—that’s what Ridker and his co-researchers have been saying all along. Ridker has been demonstrating this concept since he and Gavin Blake noticed this almost 20 years ago.

Then things made a major step with the WOSCOPS (West of Scotland) trial (Shepherd et al., 1995). Statins were shown to help, whether the LDL was high or low, which Ridker and his co-researchers demonstrated in their study called the JUPITER Trial (Ridker, 2003).

Old concepts die hard, though. It took decades for the world to be ready to accept the concept of CV inflammation.

Even when Ridker published the canakinumab trial, cardiology leaders all over the world were still surprised about the concept. For decades, lots of doctors have always looked at elevated LDL cholesterol levels as the most significant factor behind heart attacks and strokes.

In our blog article titled “How Does Inflammation Cause Cardiovascular Disease?,” we have written that CV inflammation, not cholesterol levels, is what we should watch for. In fact, only 50% of those who had a heart attack had high LDL levels (Harvard Health, 2017).

Ridker and his team did a splendid job emphasizing the importance of knowing one’s inflammatory status. As a biological process, inflammation causes a person to lay down plaque and make that plaque unstable.

How do we know then if we have an ongoing inflammation?

There are various tests for that, though there’s no single definitive test for CV inflammation. Good thing, there are inflammation panels (a set of different tests) that could help us detect and measure ongoing inflammation inside us.

The sample report below is from an inflammation panel done by Cleveland Heart Lab (now owned by Quest Labs). It includes 4 tests: CRP, MACR, Lp- PLA2, and MPO. 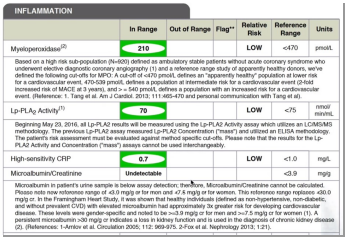 If we want to use these pieces of information effectively, it’s a must that we understand the meaning of these tests and how they relate to the inflammatory process.

MACR or microalbumin-creatinine ratio measures the amount of the protein albumin that’s excreted in our urine. Among the tests in the inflammation panel, MACR is perhaps the most important one. MACR is actually a test of kidney function, but many doctors aren’t aware that it can detect and measure CV inflammation.

The kidney is made up of filters, with each filter called a glomerulus (plural: glomeruli). There are about 1 million microscopic glomeruli in each kidney. The glomeruli’s role: to filter waste materials from the blood into the urine. They have membranes that consist of the intima, the same endothelial layer lining our arteries.

A glomerulus’ intima layer retains proteins like albumin. But if the intima is damaged, it could spill high concentrations of albumin from the bloodstream into the urine.

Furthermore, a damaged intima would also leak LDL. If albumin is leaking into the urine, it’s likely that LDL is also leaking through the arterial wall.

So if a high concentration of albumin is detected in the urine, that could be significant evidence of inflammation as well as cracks or holes of the damaged intima. 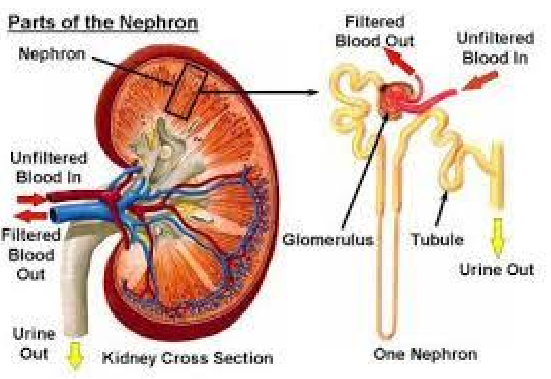 The importance of measuring creatinine

There are microalbumin test strips that can be easily bought from a drugstore. Urinate on one of those strips, then match the urine’s color to the inserted guide to get the albumin concentration. However, these test strips aren’t the same as the MACR test we discussed here. Here are the reasons:

Both scenarios would give a false reading. To rule out hydration, dehydration, and filtration rates, we need to include in the measurement a body chemical that has a steady-state secretion pattern. In the MACR test, that chemical is creatinine.

Creatinine is a waste product made by the muscles. It also goes to the kidneys, filtered through the glomerulus, and excreted at a steady pace.

How to interpret MACR test

The lab report will contain a limit. In our sample report, that specification is <3.9 mg/g. If your result is under this specification, you’re doing good, which means not only are your kidneys intact but your arteries are also in good condition.

Lp-PLA2 stands for lipoprotein-associated phospholipase A2.

It’s also called PLAC2. It’s an enzyme released by immune cells called monocytes. (Enzymes, by the way, are proteins that activate or inhibit biochemical reactions inside the body.)

Like the MACR test, the Lp-PLA2 test is also important. Mayo Clinic has even dubbed Lp-PLA2 as “a novel biomarker of atherosclerosis” (Mayo Clinic, 2015).

The snapshot compares 2 levels of Lp-PLA2 versus the probability of having CV events over the years. In the study done on thousands of people, those subjects with higher Lp-PLA2 levels seem (equal to or greater than 225 nmol/min/mL) to have a higher chance of experiencing a CV event, supporting Mayo Clinic’s claim about Lp-PLA2 being a good predictor of heart attacks and strokes. 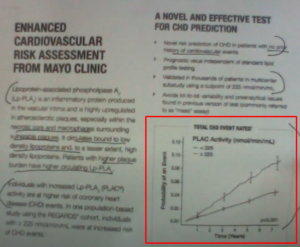 The function of Lp-PLA2

This is how the Lp-PLA2 enzyme works.

Monocytes slip through the intima and into the intima-media space. When these monocytes become activated, they transition into a slightly different cell type called macrophages. They continue to grow and become scavengers, looking for plaque and pathogenic materials to destroy and consume. They join other activated macrophages, forming foam cells and fatty streaks.

As this process continues, the immune cells release more enzymes to destroy and digest cellular trash. Lp-PLA2 and other enzymes only appear when the cell destruction process is active. 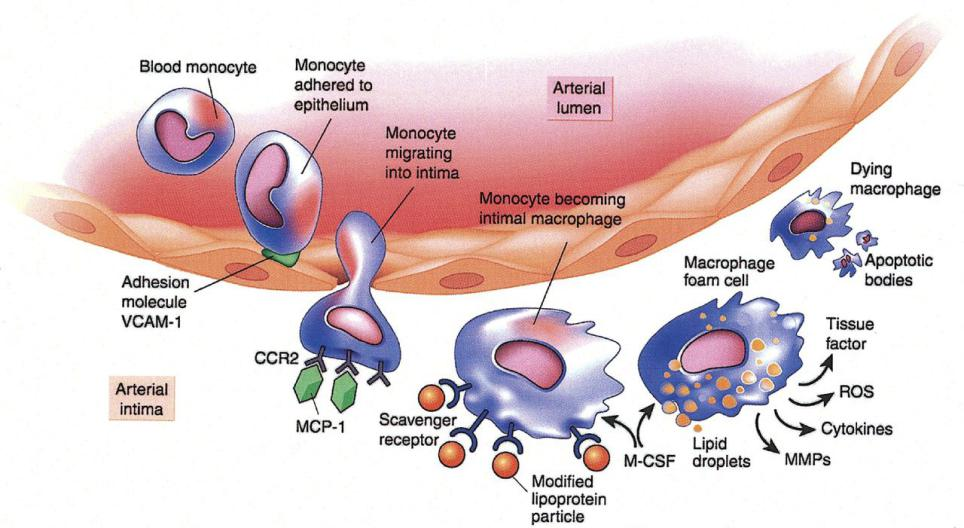 Also, Lp-PLA2 is involved in pulling other immune cells into the inflammation area. These immune cells also release their enzymes, some of which form the dangerous necrotic core or what we call “hot” plaque.

An actual heart attack or stroke happens when this hot plaque breaks through cracks in the intima, contacts with blood, and forms a deadly clot.

How to interpret Lp-PLA2 test

You’re good if your Lp-PLA2 levels are within the lab’s range. From our sample lab report, that specification is <75 nmol/min/mL. If your result is higher than this limit, that could be a sign you have inflammation.

Polymorphonuclear leukocytes or neutrophils are another type of immune cells we expect to arrive at the site of CV inflammation.

They do the same thing as monocytes, but they release their own enzyme called myeloperoxidase or MPO. Like in the case of Lp-PLA2, an elevated presence of MPO indicates inflammation within the arterial walls.

MPO is also a part of the body’s immune system. One interesting thing about MPO is its heme pigment, which gives MPO its green color in neutrophil-rich secretions (like pus and some forms of mucus). For instance, when a child gets a cold, and they secrete mucus, expect the secretion to have a green tint that comes from MPO.

How to interpret MPO test

Our sample lab report indicates that a good MPO result is any value that’s lower than 470 pmol/L. However, other labs follow a different range; sometimes, the limit is 400 or even lower. Check the specific range provided by the lab to know whether you’re good in terms of MPO.

The problem with the MPO test

While the MPO is also an important part of the inflammation panel, it is not as reliable as the MACR test or the Lp-PA2 test. Why?

Among the inflammation panel tests, MPO (by far) gives the highest number of false-positive tests. That usually happens if the lab technicians aren’t careful during preparation—like insufficiently spinning the blood sample or improperly pipetting the specimen. Such actions could lead to an erroneously high MPO result.

That’s the reason the MPO test is the “joker.” A patient can have good results in other inflammation tests, but if the MPO is too high, all bets are off.

So once a patient gets a high MPO, the result is assumed to be a false-positive one, and the doctor would order a retest. The patient would also be ordered to take melatonin as a “treatment.” If MPO is still high after the retest and melatonin, the doctor should look for the other components of inflammation.

CRP is a protein made by the liver in response to multiple inflammatory challenges.

For decades, CRP tests are used to monitor patients with inflammatory diseases, like lupus and rheumatoid arthritis. Not only that, but the CRP test is also a common tool for screening CV inflammation.

If the test you took is named “hsCRP” or “high-sensitivity CRP,” it’s quite the same as the standard CRP test, though it’s more sensitive as it can detect low CRP levels.

How to interpret hsCRP test

Interpreting your hsCRP results is simple. Just look if your result is within the given limits. In our sample lab report, that limit is usually 1.0 or below.

The American Heart Association (AHA) and the Centers for Disease Control and Prevention (CDC) have provided additional ranges to categorize patients based on risk:

CRP is the inflammation marker used by Paul Ridker and his team in their CANTOS trial. Though some researchers use CRP alone in their studies, we don’t recommend using only CRP for individual patient assessments. There are just too many false-positives, false-negatives, and other factors that could affect CRP.

For instance, some studies have shown that days or weeks after getting a flu shot, two-thirds of patients would have an elevated CRP. Statins, NSAIDs, and hormone replacement therapy also affect CRP levels.

That’s why we tend not to put much attention to CRP as it’s the least reliable among the 4 inflammation panel tests. Not to mention that many doctors are not watching for signs of CV inflammation. They still look at LDL levels instead of inflammation when screening heart attack and stroke risks of their patients.

Now, with the few doctors that do look for inflammation, unfortunately, the one thing they look at is the CRP level. While CRP is a generic indicator of inflammation, it’s not an excellent one for CV inflammation. So doctors and patients should always use the CRP test along with other inflammation tests.

If you want to know more about CV inflammation, these 4 tests comprising the inflammation panel, and how you can avail the tests, PrevMed has a stand-alone course for such a purpose. This course contains videos and reader-friendly texts to help you learn life-saving information in under 2 hours. Check out our CV inflammation course here.