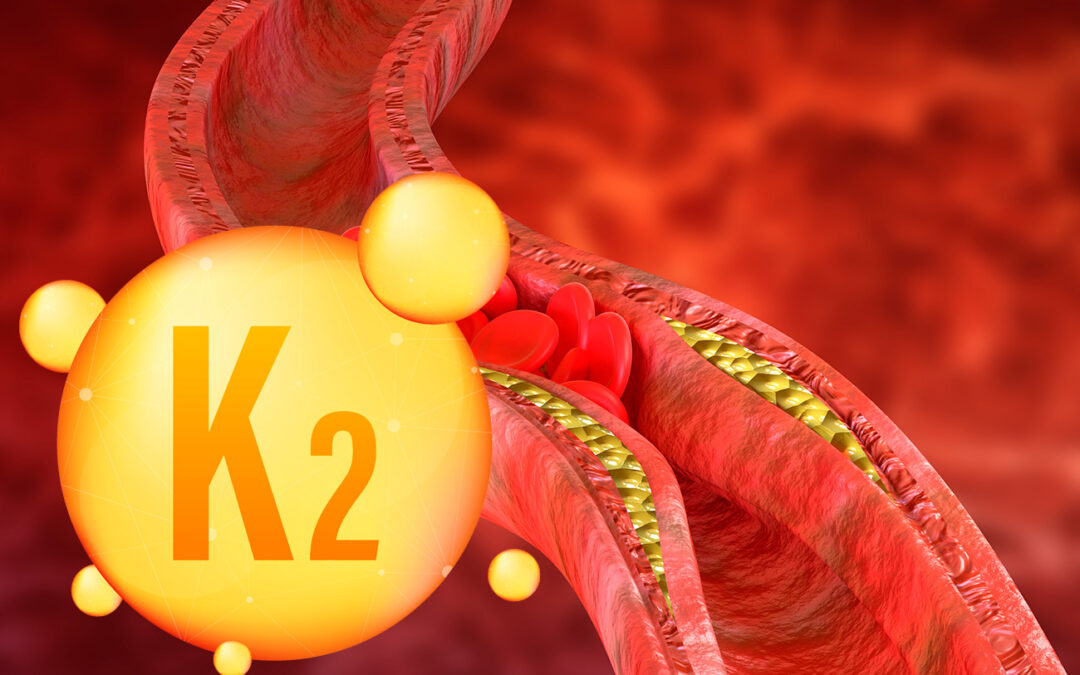 The vitamin K2 story can be confusing, you see a lot of emotion, a lot of hype around it, maybe more so than the facts.

In the previous blog we talked about a protein called matrix gla protein (MGP), this protein helps some of the activities which decrease calcium in the artery wall and is involved with some hormones we will discuss a little bit later. 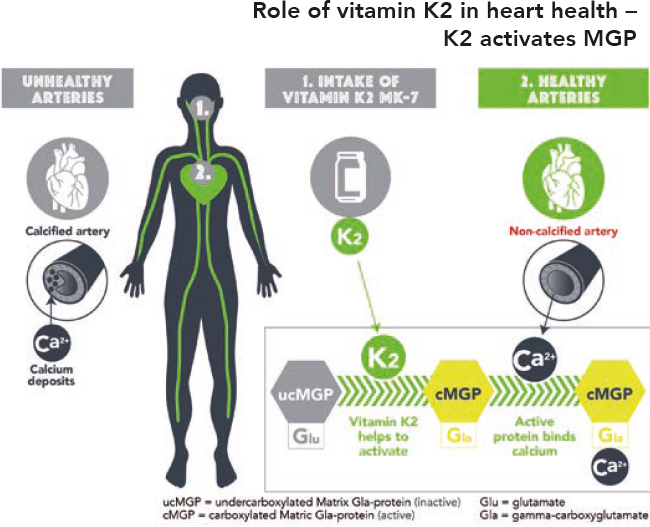 Carboxylation requires K2; therefore,  K2 is required to get MGP (matrix gla protein) activated so it can start pulling calcium out of the arteries.

That is one part of what you continually hear about pulling calcium out of the arteries. There’s good research around it.

Here is a diagram about the carboxylation. It comes from an article of the Journal of the American College of Cardiology. It is talking about the matrix gla protein. If it’s non carboxylated, it does not function very well.  It must be carboxylated. 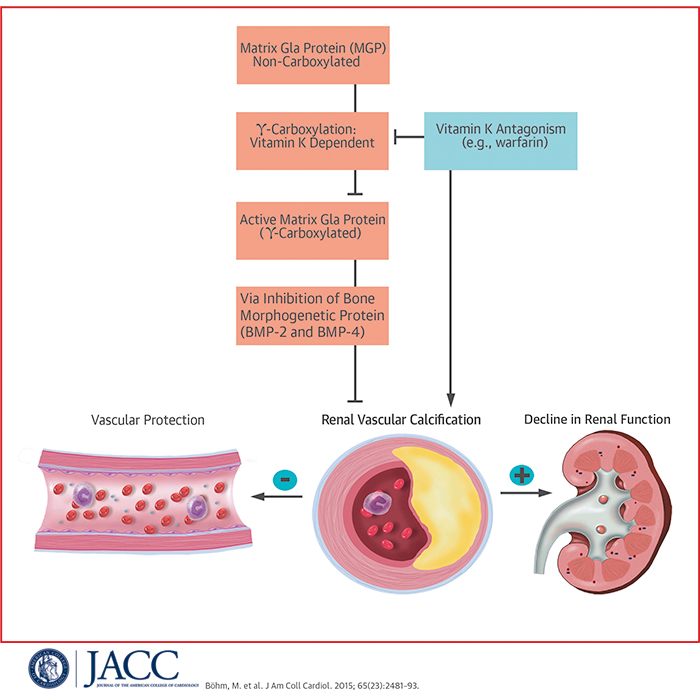 Speaking of the heated emotion around the K2 issue, it seems like if I’ve heard it once, I feel like I have heard it a thousand times,  that K2 helps vitamin D3 and the body in general, deposit calcium in the bone  and take it out of arteries.

Did  you ever wonder just how does it do that? There is so much focus on what that supplement does,  but not much focus on how it is supposed to do that.

The key part of this blog is to get a little bit deeper on the mechanism for vitamin K2, how it can have such an impact in two areas.

There are not a lot of randomized clinical trials which are good, there are, however, large publications where in the end, they show decreased plaque in arteries is associated with vitamin K2.  This starts to get clearer on the process and the mechanism.

There is another protein analogous to matrix gla protein, it is called osteocalcin. The same thing with osteocalcin,  it is inactive in the uncarbonated form,  it must be carboxylated in order to work well. 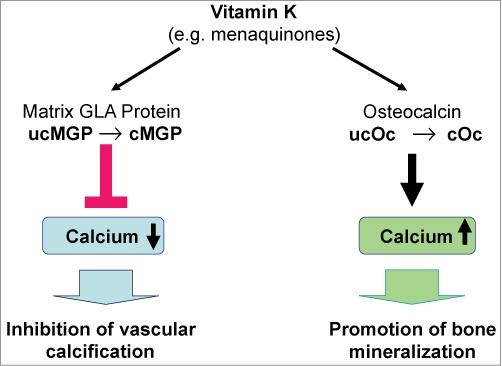 There are two important components called osteoclasts and osteoblasts, they are two types of cells which control bone growth, bone density and deposition of calcium in the bone.

Osteoblasts deposit bone and protein and grow the bone, osteoclasts take the bone up.

How am I going to remember that? Back in med school, we use a simple memory device. There is a “B” in osteoblasts for “build.” And a “C” in osteoclast for “cut”, maybe that can help you remember the difference between those two.

As you might have guessed, there’s an enzyme called gamma-carboxylase. When it is carboxylated,  then it becomes active and can start helping remove calcium from the artery wall. Vitamin K antagonists (like warfarin) are known to greatly increase calcification of the artery walls.

What does that have to do with anything? Well, warfarin appears to inhibit gamma-carboxylation and vitamin K1 activities.

How does it do it is part of the carboxylation process. One of the reasons that carboxylation process is very important is that right now it is the only lab test that we have that can look a little bit deeper into measuring these activities. We do not have great Vitamin K2 function tests. The state of the art is still inconclusive regarding vitamin K2.

There is article after article: “Low Osteocalcin Level is a Risk Factor for Impaired Glucose Metabolism in a Chinese Population.” These are not two or three articles that I have just cherry picked out of the science. There is clearly an implication for glucose metabolism linked to osteocalcin.

Does osteocalcin ring any bells for you yet?

Link it back to that first topic I brought up about vitamin K2- about the mechanism- how can vitamin K2 impact both  tissue like artery walls, and hard tissue bones? It has to do with carboxylation.

What most people do not get into,  is that  you can go both ways in terms of  calcium and bone, it helps to activate both osteoblasts (which build or deposit bone calcium and bone) and osteoclasts (which cut calcium or and/or protein out of the bone). 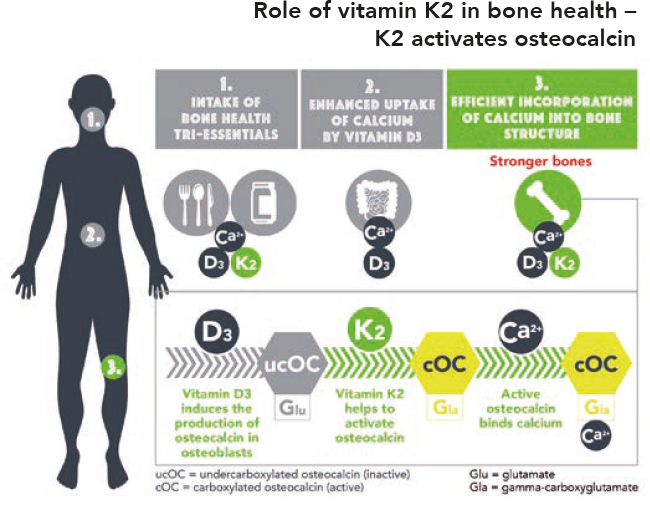 In humans, osteocalcin levels are inversely correlated with multiple variables of type 2 diabetes, such as glucose intolerance and insulin resistance.  Decreased levels of osteocalcin have also been correlated with premature or myocardial infarction and coronary heart disease.

Here is a graph, looks kind of scatter shot at first, but you notice, there are not a lot of dots down here and a lot of dots up there. There is a reasonable correlation. 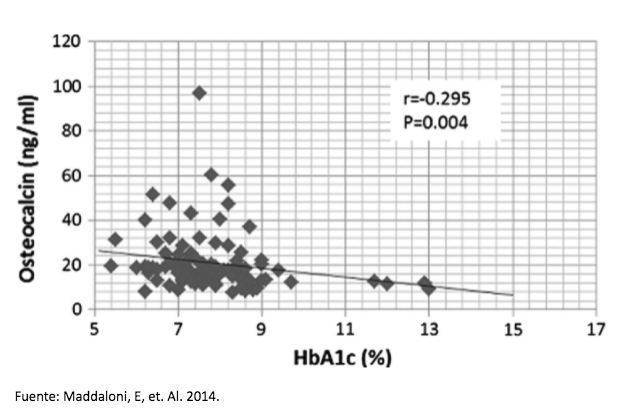 What is it? Hemoglobin A1c on the vertical axis and osteocalcin on the horizontal axis. I have not heard a lot of discussion about K2 and whether there is any K2 relationship with insulin resistance.

As I said, there is no question that I will say that K2 is related to osteocalcin, and osteocalcin is, in turn, related to insulin resistance.

This is the last part of our blog series on vitamin K and artery calcification; however, research is still coming out and we are sure we will be able to share with you more evidence soon in the youtube channel.