Thinking About Getting a Stent? or a Bypass? Read this First 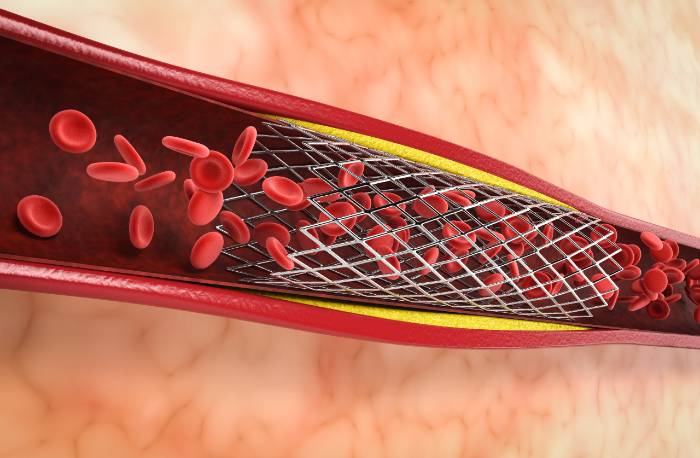 The use of stents and bypass for CV prevention is at least controversial. In this blog, we explore the existing evidence.

Today we’re going to talk about stents. So let me get this one straight from the beginning, Stents don’t prevent heart attacks, neither do bypass grafts, and we will find out why.

We recently published a book called “Prevention Myths: Why Stress tests can’t predict your heart attack,” but thinking about it, maybe we should have titled the book “Thinking about Getting a Stent or a Stress Test or a Bypass Graft: Read This Before You Do.”

Today’s topic is covered in detail, sometimes the gory detail, and sometimes the bone-numbing detail of exactly what the statistics show.

Doctors’ stated intention for 90% of stents is to prevent a heart attack. But the harsh reality is that stents don’t prevent heart attacks. So are all of those stents, patient emotional pain, and coronary cath labs a waste?

Let’s look. This blog will be an analysis, a re-analysis, and an update on the ischemia trials.

It was the typical plumbing cardiologist mindset and patient’s mindset. This “plumbing analogy” is the problem with fat in arteries. People think fat in your diet causes fat in the arteries. We see arteries as pipes. Clear the pipes.

Patients want to do that, just like doctors. Don’t blame all of that on the doctors. It’s an easy assumption. But as it became more apparent that stents don’t prevent heart attacks, the easy assumption had an adjustment.

Does it have to be bypass grafts? The ischemia trial came out and included bypass grafts. The researchers said, “they don’t prevent heart attacks either.”
Let’s take a closer look. Below you’ll find an update and re-analysis of an interesting article published in 2021 in the journal Circulation, which is a well-respected academic medical journal.

The outcomes are: “Patients with stable coronary artery disease and moderate or severe ischemia would benefit from revascularization.” In other words, if you’ve got junk in your pipes and put a new vessel in there, a new pipe, you’re going to benefit. That was the assumption for this study.

They used 5,179 patients with moderate or severe ischemia. They were randomized to an initial invasive or conservative management.

Invasive management: if you surgically put a stent in the existing pipe or a new pipe (a bypass), conservative management is not performing those procedures. Then doctors use CT angiograms to assess anatomic eligibility. (Anatomic eligibility is a subjective assessment, “is there a plaque that I think I can actually stent”?) Back to the research team. They used the CT angiogram to decide whether the people had enough ischemia to include in the trial.

What were the results using a randomized comparison? People that have said all standard criteria indicate you need a stent or a bypass?
They said, “some people will get a stent or a bypass. Others are not getting a stent or bypass”. They’re going to talk to them about their lifestyle. They’re going to speak with them about medications. We’ll see who does better”.
Remember, ischemia is the condition of not having enough blood going to the heart’s muscle tissue. Moderate or severe ischemia was associated with increased mortality or death rate.

They are underlining that medically, doctors are getting it right. They know that when somebody has an increased risk for lack of blood flow to the heart tissue, it increases the severity of coronary artery disease.
Increasing severity of ischemia was associated with death and heart attack rates in the most severe groups; the four-year death rate was lower in the invasive strategy, but the four-year all-cause mortality rate was similar

There may have been one tiny signal for that die-hard stent and bypass patients; maybe it helps the patients with the worst plaque. Does it decrease all-cause mortality? No, it doesn’t. Ischemia severity was not associated with increased risk after coronary artery disease adjustment.

This trial was a large international study led by Stanford and New York University; both are well-respected universities. They found that invasive procedures are no better than medications and lifestyle advice in severe stable heart disease. Patients with angina benefited from invasive procedures in this study, as seen in other studies, like the Orbita trial. 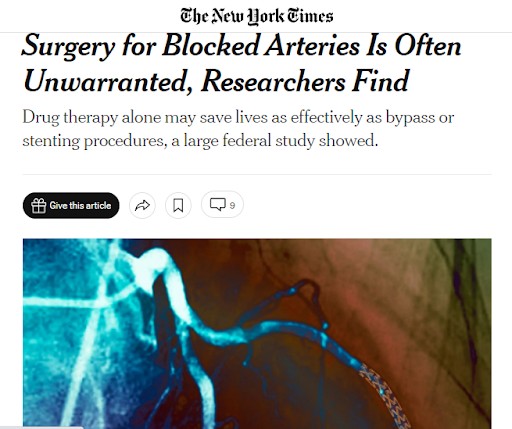 When I talk about stents, people say, you’re not telling the truth because I know that it helped my angina. The ischemia study research team designed the study to reflect current clinical practice. Patients with severe blockages in their arteries often undergo an angiogram and a bypass with a stent or bypass surgery.

According to the authors, these results suggest that patients shouldn’t undergo procedures to prevent cardiac events.

Why have we been doing so many stents and bypasses? We thought it was the right thing to do. We made an assumption. When we started looking, that assumption turned out to be wrong.

I’ll go back to the analogy of the outdated dietary cholesterol concerns. The incorrect assumption was that cholesterol in our diet caused cholesterol in plaque in the arteries. Ansel Keys based the Seven Countries Study on that mistaken assumption. We make these assumptions, and they impact the lives of hundreds of millions of people. Then we found the assumptions were wrong. How many lives have poor science hurt?

Let’s go back to the scientific evidence about stents. These newer studies indicate that 90% of stents may not prevent heart attacks. Those who underwent an invasive procedure had roughly a 2% higher rate of heart events within the first year than those on medical therapy alone. Procedure risks were about 2%.

It doesn’t help long-term, and there are procedural risks. So it’s hard to justify putting stents into stable patients with no symptoms. The authors recommend that all patients take medications proven to reduce the risk of heart attacks. They should be physically active, eat a healthy diet, and quit smoking. Plaque in the heart’s arteries is another case where patients need to take responsibility. Such a large percentage of patients say, “I’m not going to get to the right nutrition. I can’t, I’ve got food addiction, and I can’t change that. Or I’ve got a cigarette addiction, and I can’t change that”.

My average patient has lost 10-30 pounds. I can’t take responsibility for it; I’m not going to take credit for it. It’s just the point that people are losing tons of weight and getting healthy. They are doing the right thing. They are saving their lives. As difficult as it may be, it’s the only thing that works. It gets back to what we always say.

I had a young Filipino patient several years ago. He was relatively young- in his 40s. A doctor saw him and said he needed to have a stent. He ran a restaurant and ate 2-3 bowls of rice per day. He had significant borderline diabetes- way beyond mild pre-diabetes.
He said, “I don’t want to do this. I don’t want to have a procedure, especially at this young age”. I told him, “that’s your choice.”

The procedure itself, the stents or bypass, is severe. Both are still relatively safe, but they are not entirely safe. They are like no procedure at all. You saw the number coming out of the study. The absolute risk of a stent or bypass is not the procedure itself; it’s the mistaken assumption that the doctor has fixed your problem.

A bypass will cover a few centimeters worth of pipes. A stent will only cover a couple of centimeters worth of arteries. But you have 60,000 miles of arteries. How many do you have that matter and can cause a heart attack or stroke? Not that many. Stents and bypasses don’t cover all of your arteries.
Plaque is a metabolic problem. It just masquerades as a structural problem. There are some plumbing components, but they are signals. The structural problems (the plaques) are not the danger. The danger lies in the underlying metabolic problem.

If you have a plaque ready to burst in one area of an artery, you will have plaques prepared to explode in multiple places. Providing a local solution on a pipe doesn’t work.
It’s becoming more evident that the research is coming out, like these studies, showing you have to change your lifestyle. You have to stop the inflammatory process.

And don’t get me wrong, 10% of stents are life-saving procedures; when people are already experiencing a heart attack, a stent or a bypass might save their lives; we are talking about the other 90% of procedures where the evidence of benefit doesn’t exist.

Patients with angina of any severity will significantly improve if they have an invasive procedure. That’s what we have assumed. Those that have angina are still in debate. There are a lot of mixed findings in science. Although there was no absolute survival benefit from an invasive stent, I expect to get some haters.

So if stents don’t work, why are people still getting them? If you go to my book “Prevention Myths, ” Finance and money are some of the significant drivers.
There was an article in a popular book from a top-rated doctor. He’s a medical journalist named Atul Gawande. He looked at a community in Texas and described what was happening. The picture showed a fellow standing there-he was a cash machine. The doctors were using patients to mint money.
That’s the truth- you can’t get around it.
Many cardiologists, thoracic surgeons, cardiology clinics, and entire hospital systems financially depend on these highly profitable activities.

It would have been easier to drop preventive stents and bypass grafts long ago. It began coming out 5-10 years ago. It will require a lot more headbanging before the change.
So if a stent and a bypass don’t prevent heart attacks?
Diet is a crucial component; there are two things about nutrition: short-term and long-term. You don’t want your blood sugar or your insulin going high and staying high regularly. Two things will drive that: day-to-day carbs and the amount of body fat you have.

Anything that makes you overweight, anything that has you eating a lot of carbs regularly when you can’t digest them, is a problem.

Physical activity is fundamental; you cannot underestimate the value of base aerobic activities; Unfortunately, many of us baby boomers grew up when exercise was just being recognized. All they talked about was aerobics. They said,” you don’t need resistance training; you don’t need high-intensity interval training.” That was wrong. We do need this base of aerobic activity. It doesn’t have to be jogging; it doesn’t have to be running- walking is excellent. It helps with body fat.

Body fat is a big challenge for middle-aged people and older. We used to think body fat was an inert energy-storage tissue in terms of health. It’s not- it is an endocrine tissue that causes insulin resistance, diabetes, pre-diabetes, heart attack, and stroke risk.

Please take a look at other blogs or my youtube channels to find better strategies for CV prevention.