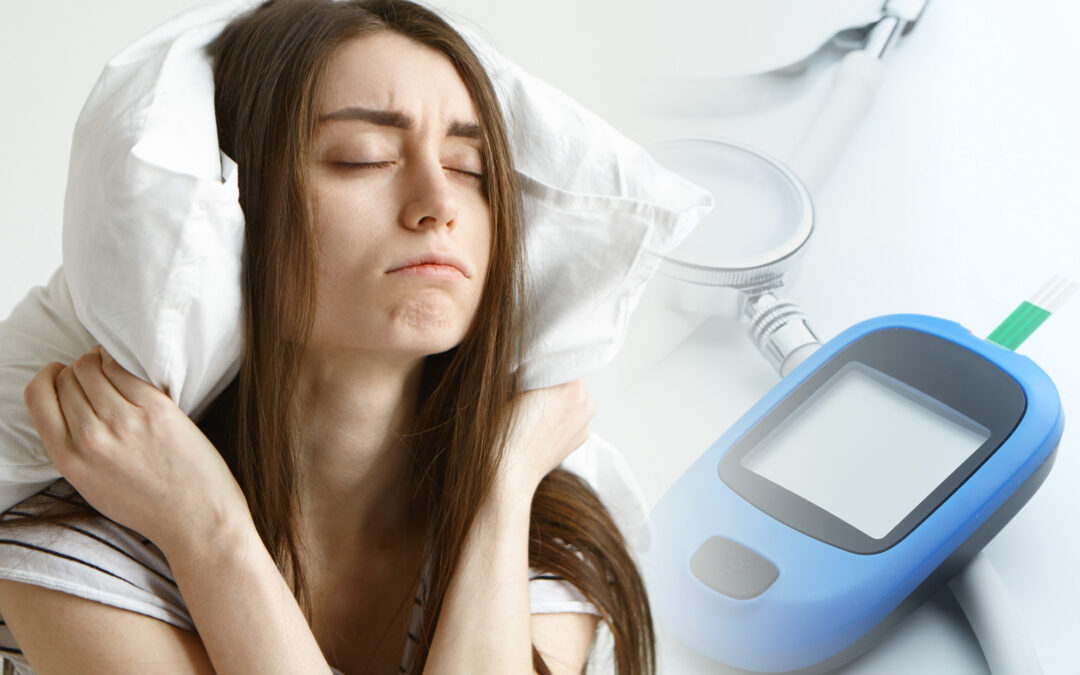 According to the International Diabetes Federation in 2015, approximately 9% of all adults have diabetes; as we look at this study, you’ll see some analytics. One of the things to remember in filtering the findings is that at least 90% of prediabetes is unrecognized. 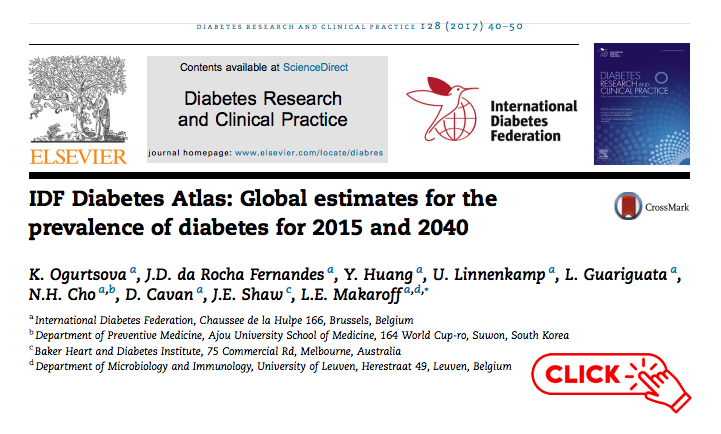 The study that we are referencing is published under the title “An Atlas on Risk Factors for Type 2 Diabetes- a Wide-Angle Mendelian Randomization Study.” They acknowledged risk factors of which people are unaware. Suggest if your BMI is 25-27, and you don’t look like Arnold Schwarzenegger, and don’t have a waist of 32 inches- you may have some issues that your doctor has not identified. The science is clear on that, too. Doctors don’t know how to diagnose the prediabetes issue.

Some of the big killers and disablers are; heart attack (the big killer) and stroke (the big disabler.). You don’t need to have full-blown diabetes; all you need to have is unrecognized prediabetes. Remember that as we go through the analytics on this study, there are a lot of cases that weren’t recognized for this study.

There are established risk factors for developing diabetes. Some of these are obesity and aging. If you’re thinking, “that’s diabetes-I, don’t have to worry about it,” be afraid, be very afraid, because 99 out of 100 people who have this risk factor don’t have full-blown diabetes. They have prediabetes, which is the same disease process. 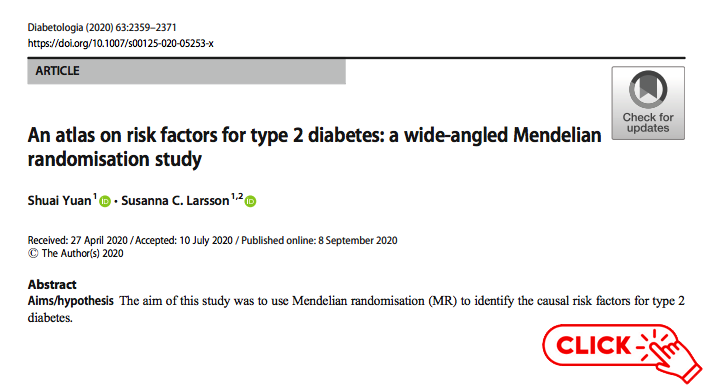 Probably you and your doctor have not documented fasting glucose over 125, or challenged glucose over 200, but it’s the same process. Think about that Mendelian randomization. I spent years at Hopkins as an epidemiologist faculty teaching other doctors preventive medicine. One of the things we did was epidemiology; it’s not just studies of epidemics. It’s what we call denominator medicine. Instead of studying all the diseases in an individual, we look at one illness in all individuals at the time;. it becomes very statistically oriented.

I also did some post-graduate work at Stanford in genetics. Having done all of that, you would think I would understand Mendelian randomization. I have to tell you; it just made my head hurt. It is one of the more difficult concepts to understand, a topic we have already explored in previous blogs.

Just, for the sake of refreshing some memories, let me try to generalize. Based on the assumption that of 80,000 genes in the human genome, the majority of these genes will distribute randomly. As we develop the gene pool (as people mate and develop the next generation), the genes for height, weight, eye color or hair color are randomly associated.

I would tend to say that’s a big assumption; maybe they’re not so randomly associated, perhaps they might have a little bit more to do with mating and continuing your genome in the gene pool.

Here’s the other thing. In the study that we are analyzing, the authors took 238 studies, including 40 individual papers. This is more than a meta-analysis. There’s a term for it: Umbrella study, it is the technical term when you’re not looking just at one meta-analysis, but you’re looking at many meta-analyses.

They identified 97 risk factors, however, only 19 increased diabetes risk, there’s just one that’s shown massive results, and this is my version of a cliffhanger. The study included over 74 000 people with type 2 diabetes; over three-quarters of a million control participants, the median age was 55, and gender distribution was equal.

You would expect these vast numbers from an umbrella study (which looks at multiple meta-analyses). The most relevant new risk factor was insomnia, meaning lack of restorative, healthy sleep.

There’s a book called “Why We Sleep” by Matthew Walker; Matthew started to go to med school but became a scientist and Professor of neuroscience and psychology; he was faculty at Harvard Medical School; he’s now at the University of California- Berkeley.

“While We Sleep” is a fantastic book; I’ve personally read it about eight times; I have sleep problems and will wake up at 3 or 4 in the morning. In the past, I used to have a lot of difficulties getting back to sleep, I tried a lot of things. Sleep hygiene is the big bugaboo for most people, but I think there’s more to it than sleep hygiene. 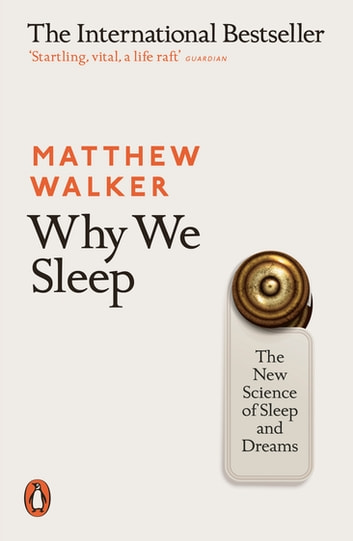 For me, two of the critical things that I’ve done to improve my sleep dramatically are:

Resistance training; we’re talking about multiple repetitions – dozens and dozens of repetitions. You want to build muscle, especially in your legs, the large muscle groups which drive your metabolism; we’re talking about 40-50-100 repetitions. This is using lighter weights (you can crank up to the significant consequences after you’ve created fatigue in those muscles from the lighter ones). A lot of people say, “Doc, you’re wrong; you just need to do 3-5 major repetitions, using as much weight as you can.” The point is, that’s been one of the things that have helped me more than anything else with sleep.

The second thing that helped me was slowing my breathing rate down. I heard about meditation. I had read it; I tried it. Look at the research, the science.

The science is precise. Most of us don’t get a lot out of meditation in terms of actually lowering our blood pressure enough to have an impact on health; it’s something positive but look at the science reviews done by the American Heart Association and the FDA. Here’s a point (they have done a lot of research on the science behind blood pressure and breathing); they said biofeedback helps a little bit, but not a whole lot.

Meditation helps some people, but not as much as device-driven, slowed breathing. On my YouTube channel, a device group introduced themselves; they are called RESPeRATE. I discovered that it measures your breathing and expiratory rates. Please consider that this is not an advertisement for respirators; it is just a discussion about the importance of sleep and a couple of things that can improve sleep.

Parasympathetic is the opposite; from my early 20s until just a couple of years ago, when I woke up at three or four in the morning, I had a hard time going back to sleep; often, I would get up because I’d toss and turn. I wonder how much of that drove me to be one of those skinny guys. You know, I am older skinny, so I kept the weight off, and my BMIs have been between 20-22, but I still developed significant prediabetes (to the point of full-blown diabetes); sleep is a critical part.

Once I did more resistance training, added some leg muscle, and significantly slowed my breathing down, I got to where I could reliably get back to sleep. However, I still wake up at 2 or 3 in the morning.

So we have covered a lot in this first part; please visit us and see part 2, where we are going deeper into other new diabetes risk factors.