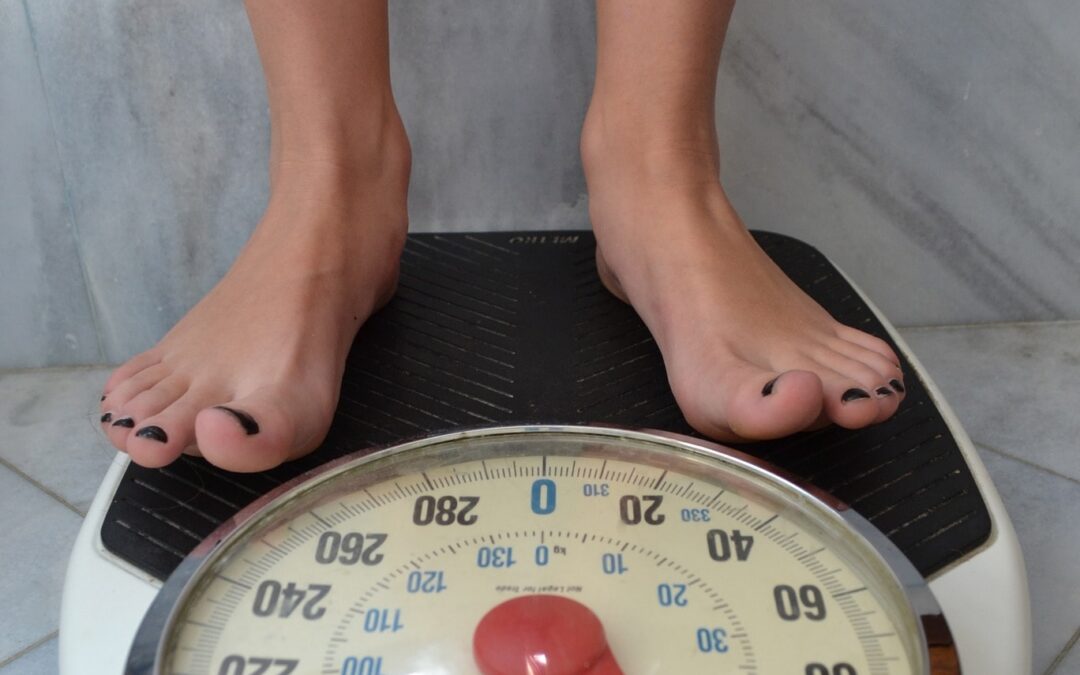 Have you heard about Saxenda and Victoza?

Saxenda is a weight loss medication, while Victoza is a diabetes medication. These 2 drugs are the same, though. Both brands refer to the same drug that goes by the generic name “liraglutide.” And liraglutide is one of those drugs that mimics the effect of metabolic hormones called incretins.

In this post, we’ll talk about liraglutide, Victoza, Saxenda, and incretins.

Incretins refer to a group of metabolic hormones that decrease blood glucose levels. They do so by stimulating the release of insulin. Some incretins can also block the release of glucagon.

Insulin and glucagons are hormones produced by a region in the pancreas called the islets of Langerhans.

These 2 hormones, though, are produced by unique sets of cells—insulin by beta cells, and glucagon by alpha cells. Insulin stimulates muscle and liver cells to absorb and store blood glucose for later use. On the other hand, glucagon promotes the release of stored glucose from the liver. 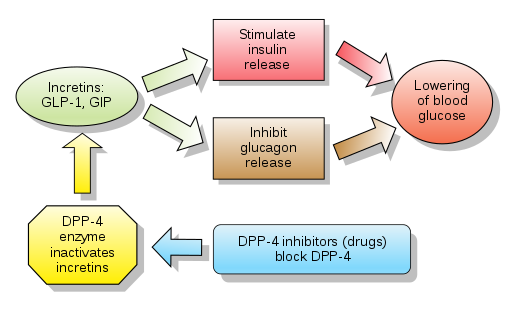 Belgian physiologist Jean La Barre coined the term “incretin” in 1932. It was La Barre who proposed that incretins be used for treating diabetics. Incretins also appear to slow down nutrient absorption in the gut through gastric emptying.

Medications with the incretin effect

Many molecules fulfill the properties of an incretin. Two examples are GLP-1 (peptides glucagon-like peptide-1) and GIP (gastric inhibitory peptide). Both GLP-1 and GIP are inactivated by an enzyme called DPP-4 (dipeptidyl peptidase-4).

Why do we need to mention GLP-1 and DPP-4? Because there are medications that enhance incretin action. They do so by:

Exenatide, the first GLP-1 receptor agonist on the market, was derived from the saliva of the Gila monster, a slow-moving and venomous lizard. The Gila monster eats only once or twice a year. 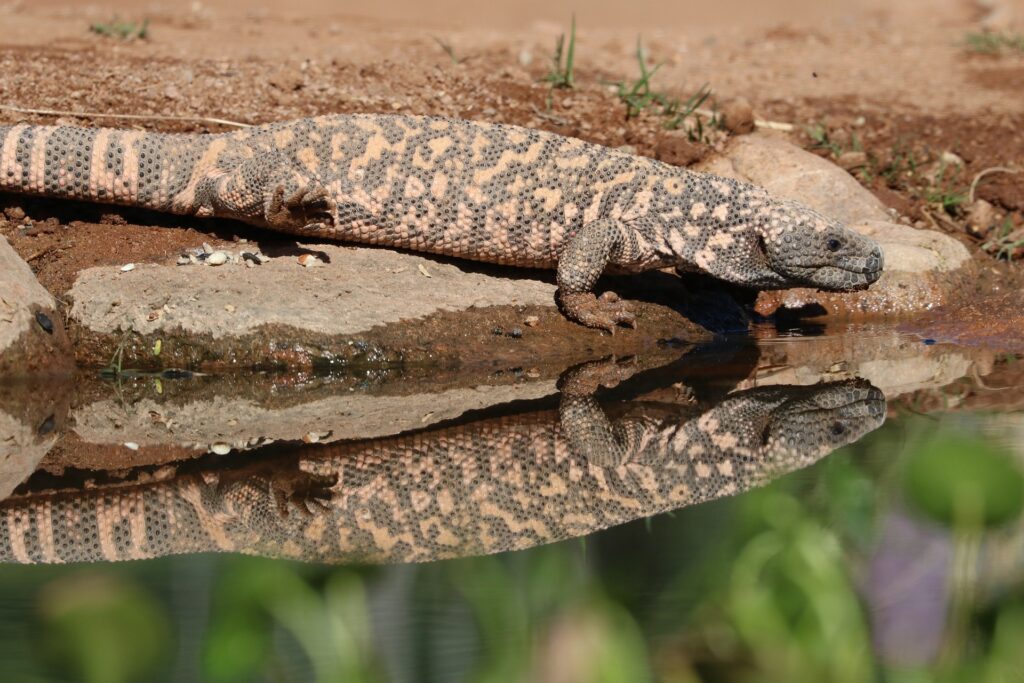 To assimilate meal intake and continue making its pancreas and gut active, the lizard uses a salivary hormone that has an incretin effect. Dr. John Eng, a doctor from New York, made this discovery.

Like exenatide from the Gila monster’s saliva, liraglutide is also a GLP-1 receptor agonist.

Manufacturer Novo Nordisk designed liraglutide to treat type 2 diabetes. Liraglutide was approved as a diabetic drug in 2009 in Europe and in 2010 in the US under the brand name “Victoza.” Victoza was a blockbuster. It took only a few years for this drug to earn 2.3 billion USD in sales in 2014.

Is Saxenda the same as Victoza? Yes. If you do a search on Saxenda or Victoza generic name, you’ll get liraglutide. Both are injectable prescription medicine.

After a short time on the market, Victoza was found to have a significant “side effect.” People on Victoza are showing decreased appetite and then weight loss. Novo Nordisk saw a huge opportunity in marketing liraglutide as a weight loss medication too.

That’s exactly what the company did. Novo Nordisk made a new brand—Saxenda—and profits grew to 3.5 billion USD in 2015. So now, we have Victoza on the diabetes side and Saxenda on the weight loss side.

Liraglutide increases insulin and decreases excessive glucagon, but only if the blood glucose is at high levels. That’s the advantage of liraglutide over metformin, another popular diabetes medication.

With metformin, if you have insulin, but your blood glucose level is already low, you’ll get a huge drop in blood glucose levels—from 80 mg/dL and above to the low 20s or 30s. Such very low levels won’t only make the person pass out but also make it dangerous for the person to drive or operate a machine. For comparison, a normal hypoglycemic episode only goes to the 50s or 60s, so the 20s or 30s is really a huge drop and a significant danger.

Can liraglutide be used for weight loss?

It appears to be the case.

When you look at things deeply, it looks like liraglutide’s mechanism for losing weight is really simple. It seems to decrease gastric emptying. In other words, it closes the outlet of the stomach, which makes a person feel full or stop eating. 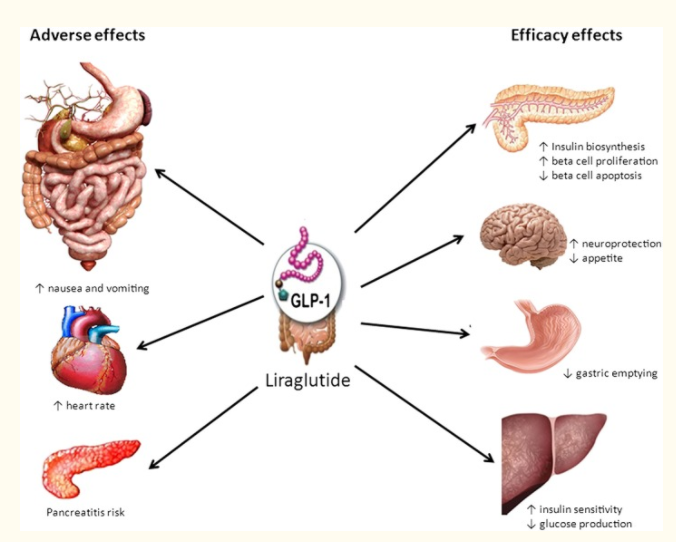 Does liraglutide have any cardiovascular impact?

Since 2008, the FDA required companies of diabetic drugs to look at a specific drug impact called cardiovascular outcome. Why? That’s because heart attack and stroke are the top causes of death among diabetics.

Does Liraglutide have any side effects?

Liraglutide is not devoid of controversies.

One of these controversies involves the non-profit group Public Citizen, which petitioned the FDA in 2012 to have liraglutide removed from the market. Why? Because there were significant reports of side effects like thyroid tumors and pancreatitis, risks which the group believes outweigh the drug’s benefits.

Novo Nordisk didn’t enjoy hearing that and did not encourage the awareness of such major side effects based on concerns about pancreatitis. Then in 2013, physicians from Johns Hopkins found a significant increase in hospitalization because of pancreatitis.

Then Peter Butler, a physician at UCLA, came in. He’s a specialist in doing autopsies on the pancreas. Note that the pancreas is difficult to examine during autopsy because it releases enzymes that digest themselves after death.

Here’s the problem—the growth of the beta cells appears to be very disorganized. This disorganized growth may lead to pancreatitis. And that’s the association between liraglutide and pancreatitis.

Victoza and Saxenda are making a lot of profits, and many people are seeing a good impact with these meds. But with reports of significant side effects, be careful and cautious if you’re taking these meds. And know that you can still resort to diet and exercise for your weight loss regimen.

Diabetes in Control. Dr. John Eng’s Research Found That The Saliva Of The Gila Monster Contains A Hormone That Treats Diabetes Better Than Any Other Medicine.  Diabetes in Control website. September 18, 2007. Accessed September 8, 2020. https://www.diabetesincontrol.com/dr-john-engs-research-found-that-the-saliva-of-the-gila-monster-contains-a-hormone-that-treats-diabetes-better-than-any-other-medicine/