Is a Low-Carb diet related to Coronary Artery Calcification? 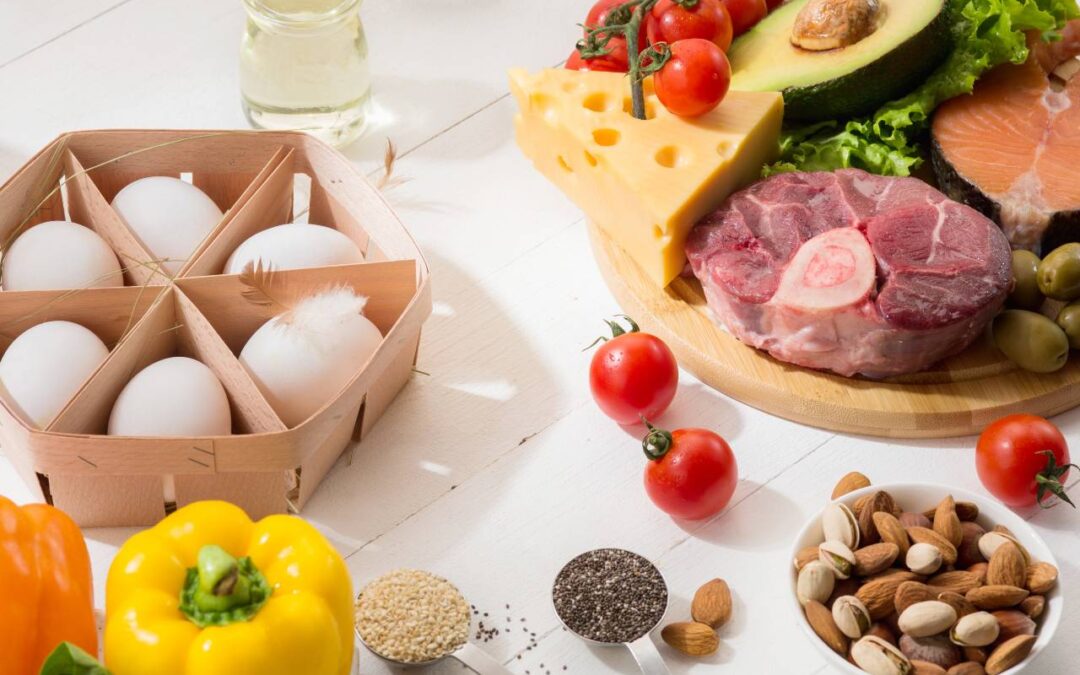 Stents don’t prevent heart attacks, but what about a low-carb diet? Let’s find out in today’s blog.

Today we’re talking about a study that measured people’s diet. They found that people on a low-carb diet had a progression in their calcium score. You can see the study in the image below.

The author’s conclusion was that a low-carb diet creates heart attack and stroke risk; that caught my eye. I’m not going to say it’s entirely wrong. The observations are interesting, but it boils down to our filters and what realities we know and understand.

There’s a lot of understanding about cardiovascular inflammation. Cardiovascular inflammation tends to drive heart attack and stroke. We can’t predict heart attack and stroke because it isn’t a slow clogging up of the pipe, the artery, like hair clogging in the drain of a bathtub or a shower. It’s an acute event-a sudden event. The sudden event is a clot. The clot happens when we have inflammation of plaque. Inflammation of plaque comes most often from undiagnosed prediabetes.

Prediabetes is the root cause & an issue for most of us. We don’t metabolize carbs very well. Be afraid if your doc has said you have “a touch of sugar”. Prediabetes is manageable, very manageable. What’s unfortunate is that primary care doctors, cardiologists, family practitioners, and internists are the doctors that are responsible for recognizing this, dealing with it, and helping you as a patient. But they don’t realize it. At least three-quarters of the people with diabetes don’t know it. Over 90 percent of people with prediabetes don’t know it.

There are two reasons: Doctors don’t always understand how bad it is; they think they saw just a little bit, and they don’t know that it doesn’t take much prediabetes to cause cardiovascular inflammation leading to heart attack and stroke.
Primary care heart attack and stroke prevention is a “buyer- beware” market.
You need to know some basics.

The good news is it doesn’t take long. In a couple of hours, you can learn about this issue. You can use the information to protect yourself. This lack of awareness of prediabetes is preventable.

There’s a well-known researcher at Stanford named John Leonidas. He says most studies are wrong. We all approach things with filters that often lead us to conclusions that avoid reality.

Let’s look at the filters in the article on carbs. Researchers set out to show an association between low-carb diets and coronary artery calcium progression. The researchers concluded from the Cardia study that low-carb diets caused coronary artery risk in young adults.
Two thousand two hundred twenty-six subjects completed a baseline CT and food frequency question.
The CT (computed tomography) is a calcium score. The authors defined a low-carb diet as an intake of 43% or fewer carbohydrates; (I haven’t seen anyone define low-carb diets that way; it’s way too high.)
They used the coronary artery calcium (Agatston) score. It is a standard score used for CV risk.
They calculated every calcified lesion in every coronary artery. (Here’s another red flag: calcium scores are easily standardized. It has a critical defect; it doesn’t detect soft plaque.)

To better understand CV plaque & calcification, it’s helpful to digress into another, less commonly used form of plaque measurement – the Intima-Media Thickness test (IMT). IMT is the one I mostly use. That’s because IMT is the only test that reliably shows soft plaque. Soft plaque (not calcium) confers immediate CV event risk.

Here’s the apparent contradiction: I’m not surprised; unfortunately, the research team didn’t understand the true significance of calcium in plaque. There’s more information in the background to be considered.

Take a look at the image below. 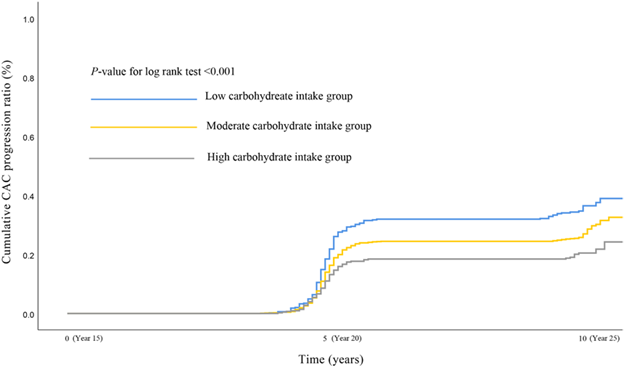 If you look at the blue line, the low carb intake group, the yellow line is a moderate curve, and the black line is high carb. The vertical axis is how much calcification they have and their Agatson Score progression of calcification.

I see those exact findings in my patients. I get people that have higher triglyceride over HDL. The population I see as patients were participants in this low-carb diet. People come to see me because they have cardiovascular risk. They drop their carbs & lose weight. They start an exercise program to increase muscle mass. And their plaque calcifies. In fact, that calcification process is how we know their plaque has stabilized. The researchers in the CARDIA study don’t understand that soft plaque calcifies as it stabilizes.

Let me repeat that for emphasis. As soft plaque stabilizes, we want to see it calcify. If you don’t understand or believe this, please see our coverage of the Honda study.

Most of my patients have already reduced carbs. They’ve already started doing an intermittent fasting program. They are beginning to lose weight; their triglycerides are dropping. And their HDL is increasing. So their TG/HDL ratio is dropping significantly. Their hemoglobin A1c is decreasing; these signs indicate that they’re getting better and decreasing their insulin resistance. They’re reducing their cardiovascular inflammation. Their inflammation panel is improving.
I have to talk so many patients out of this issue because they say, “I came to you because I’ve had a calcium score done. I’m going to get another one because I expect it to drop. My response is always, “Be careful. It’s likely to go up, not down”.

In the Honda study took images of plaques. (See above) There’s little calcium in that plaque. Then they took a comparative picture of another plaque. See the white specks in the plaque? White specks are calcification.

They found in the study that people on a low-carb diet who stayed on it for years progressed to this. They increase their risk for cardiovascular disease. The biggest concern that I have with this study, and its interpretation, is their interpretation of calcium score.

You may think: that looking at calcium in an IMT is subjective. No, it’s not. You can see the image.

Both studies look at CV plaque. You can use this digitization method with either one of them to see how much calcium is in the artery wall.

You can see the science in this article. It shows an event called a Kaplan-Meyer curve. Insurance actuaries developed the Kaplan-Meyer to look at death rates. However, these are not death rates-these are event rates. Every time somebody has an event, the line drops.

In the study we reviewed, they misinterpreted the definition of a low-carb diet. But that wasn’t the biggest problem. The biggest problem is that the CARDIA research team didn’t understand the apparent contradiction between CV plaque & calcification. These people were stabilizing their plaque; the CARDIA team just didn’t know it. There still was a selection bias. You selected people that had prediabetes and plaque and soft plaque.

That group knew they had a problem. They planned to stop smoking, lose weight, and go on a low-carb diet to manage their issue.

Sure enough, they started calcifying their plaque. Instead of increasing CV risk, they were decreasing their risk.
The authors had not reviewed the Honda Study; they did not use an IMT to evaluate.

Now, for some, CIMT and calcium seem to be the fundamental risk factors. That’s why I use IMT and calcium. One of the problems we have to look at is “garbage in/ garbage o.”.” When you use the tool, you need to understand what the tool is telling you.
Today’s study showed that you tend to increase your calcium when you go on a low-carb diet.
Some people (like the CARDIA research team) might think that’s causing an increase in cardiovascular risk. As you saw from the Honda study, it’s not always the case.

IMT, especially because IMT is the only test that shows soft plaque. A calcium score is helpful. there
If you take a group of people and separate them by calcium scores, the folks with higher calcium scores will usually be a population with more cardiovascular risk.

The Difference between Soft plaque and Calcified plaque

We end up with studies saying that a low-carb diet increases your risk, and it is not necessarily like that. Low carb diet can cause calcification. Just like strenuous exercise, let’s not just assume calcification in somebody that already has soft plaque is a bad thing.
Now how do you know you are stabilizing your plaque: you lose body fat, you decrease hemoglobin a1c, you reduce your triglycerides and your triglyceride over HDL ratio, and you start getting back into shape
You can lose some of the IMT, although it’s rare. is not to quote reverse or get rid of
The practical goal is to stabilize plaque, not reverse plaque. About everybody can stabilize it.

For some people, this might seem a little confusing; the bottom line is, that higher calcium scores do not necessarily mean you have a higher risk; it just means that you have more calcified plaque; now, you might want to get a CIMT to define if you have soft plaque, making lifestyle changes can lead to stabilizing that soft plaque, meaning calcifying it which can lead to higher calcium score, which again, in this scenario is not necessarily a bad thing.