The first lesson is an overview of insulin resistance. This covers the definitions and dives into a comparison of terms to clear up the confusion between insulin resistance, prediabetes, and metabolic syndrome.

However, there are some distinctions on these terms that you do not need to dwell on. The first part also covers the other basics that you need to know.


These three terms mainly differ in terms of perspective. If the issue is approached by a biochemist or a physician who is focusing on the biochemical issues, it is best defined as ​insulin resistance​ (IR). In the case of a public health professional looking at the issue as an illness, ​prediabetes​ is a more applicable definition.

Lastly, ​metabolic syndrome​ was more commonly used a few decades ago when doctors started becoming aware of the common patterns, signs, and symptoms that are correlated to each other. However, because no clear disease could be defined yet, the general group of symptoms was referred to as a metabolic syndrome.

Multiple tests have been developed to establish the difference between prediabetes and diabetes. Most people working in the field of medicine who are focused on this issue refer to prediabetes as the “diabetes highway.”

The main difference between prediabetes and diabetes is not the disease process but rather the degree. The table below shows the values set by major organizations (WHO, ADA, IEC) on the different tests to define prediabetes.

While the values presented by WHO and ADA are agreeable with our recommended values, it is best to start being aware of your risk when you start approaching the lower limit (in the high 90s). In the case of a 2-hour glucose result, reaching a value of 200mg/dL would mean that you have full-blown diabetes. If you’re aiming for near-perfect carbohydrate metabolism, values over 120mg/dL after a 2-hour or 75-g glucose challenge are unfavorable.

When you start looking at hemoglobin A1c values, the ADA and IEC have differing opinions. However, we would caution people that any value above 5% is already a clear warning sign. The upper HbA1c limit of both organizations is 6.4% because a value of 6.5% and higher is defined as “frank” or (full-blown diabetes). 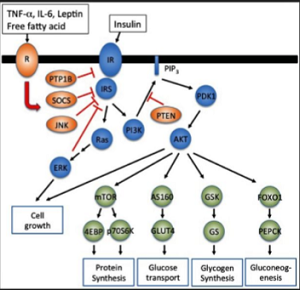 For clarity of discussion, the term “diabetes” in this course refers to type 2 diabetes. Type 1 diabetes is a significantly different disease where your body is unable to produce insulin due to damage to the beta cells in the pancreas.

Whether we are talking about diabetes or prediabetes, this image shows the same overall process that occurs mostly in muscle or liver cells. Those are the cells that are capable of pulling sugar or glucose from the blood.

You can start seeing the damage in patients with blood sugar levels above 120mg/dL, especially above 140mg/dL. One of the things that you begin to see is elevated hemoglobin A1c. Glucose can attach to hemoglobin and damage it.

Upon detecting high levels of insulin, insulin receptors in muscle and liver cells trigger a cascade of metabolic processes where the sugar in the blood is taken into the cell. This decreases the amount of sugar in the blood and minimizes the damage to hemoglobin that can be caused by high blood sugar levels.

However, if the body has insulin resistance, these cells won’t respond to insulin, and sugar is not taken off from the blood. The pancreas then makes more insulin to drive blood sugar to enter these cells. A higher level of insulin must be produced to overcome the cells’ weak response so that the amount of sugar in the blood remains normal. 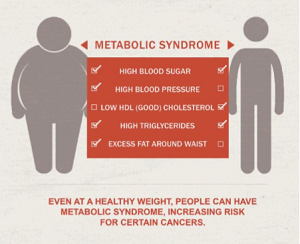 A syndrome is a group of signs and symptoms that occur together and characterize a particular abnormality or condition. In other words, the doctor has yet to provide a clear definition of what is going on. For example, high blood pressure, low high-density lipoprotein (HDL), and belly obesity are a few things that you can find in people who tend to develop diabetes later in life. 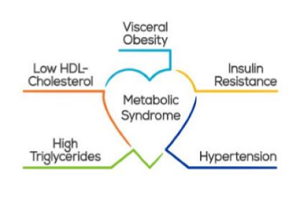 The term “metabolic syndrome” is not as common as it was in the 1980’s. This is because insulin resistance or prediabetes are both terms that defined the condition so well that these two have negated the need to refer to the condition as a syndrome.

We now know that you don’t always have to have high blood pressure or visceral obesity. When you watch the videos that are part of this course, you can see that I don’t have lots of fat around my waist. However, I already told you that I have insulin resistance.

This is part of the reason why the term “metabolic syndrome” is not often used anymore. It only refers to a cluster of common signs and symptoms. Not to mention that there are
also different definitions for symptoms that make up metabolic syndrome. Thus, this term is not used in this course.

Your main goal is not to learn the definitions of these terms. Instead, the focus of the course is to teach you the disease process involved. Understanding the biochemical processes can give you insight into what actually happens to your body and what you can do about it.

In an editorial published in Science Magazine, Charles Piller defined prediabetes as a dubious diagnosis.

“​It doesn’t matter because there are no complications associated with it; it’s just a definition.”

In his article, Piller labeled the CDC and ADA as scaremongers. However, while there may be a few things on which we don’t agree with these organizations, there is no disagreement on the fact that prediabetes is a serious disease. While Piller made several agreeable points, his claim that prediabetes presented no complications is something that should be contested.

Whether you call it prediabetes, insulin resistance, or metabolic syndrome, there is a lot of evidence showing that this condition can cause a heart attack, stroke, eye damage, and several other diseases. It is a major cause of plaque and cardiovascular inflammation, which means that it increases your risk of heart attack and stroke.

Aside from that, retinopathy is present in a third of patients that are diagnosed with type 2 diabetes. This signifies that during the prediabetes stage, the damage that causes retinopathy has started. Dale Bredesen has even claimed a link between Alzheimer’s disease and insulin resistance.