In that report, AHA unequivocally stated that it does not recommend coconut oil.

However, because coconut oil increases LDL cholesterol, a cause of CVD, and has no known offsetting favorable effects, we advise against the use of coconut oil.

This was just the latest in a decades-long battle over coconut oil, with the scientific community battling over it for a long time.

I had my own battles about coconut oil as well. I loved coconut when I was a kid. My mom and my grandmother (who I grew up with) both knew that my favorite birthday dessert was coconut-based (like coconut pie and coconut cake). Then I grew up, became a physician, and started teaching prevention.

Lipids are biomolecules soluble in nonpolar solvents. They include fatty acids and their derivatives.

While the term “lipid” is usually interchanged with the term “fat,” these two are different. Fats (or triglycerides) are a subgroup of lipids. Other lipids include cholesterol, hormones, and certain molecules making up our cell membranes.

A fatty acid molecule has an acid end and a carbon chain. Fatty acids making up fats are saturated or unsaturated.

“Saturated” means that the fat has no double bonds between the carbon atoms of its fatty acids’ chain. This quality was decided to be a bad thing (with saturated fats popularly accepted to be bad for one’s health).

Conversely, unsaturated fat has one or more double bonds in the molecular chain of its fatty acid components. 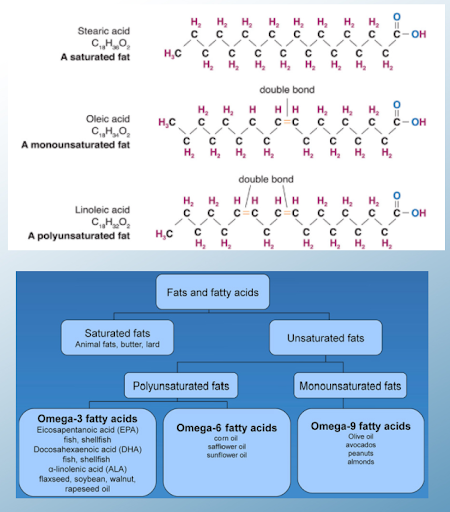 If you hook 3 fatty acids together with a glycerol molecule, you’ll get a triglyceride.

Triglycerides are a subgroup of lipids. Now, when we mention “fats,” we usually refer to triglycerides. You may have already encountered triglycerides when you had your cholesterol test panel.

Triglyceride is chemically formed from 1 glycerol and 3 fatty acid chains. This is how triglyceride or fat looks like.

When you digest fats, you get ketosis. Diabetics develop ketosis because they can’t burn sugar well. You want to get ketosis in your low-carb diet because you’re not burning sugar. You create ketones every time you burn fat.

Diabetics, though, can get into a dangerous form of ketosis called ketoacidosis because of the extent of their metabolic challenge in burning carbohydrates.

So which is coconut oil?

Coconut oil is saturated fat. It is composed of 50% lauric acid, a medium-chain fatty acid. Lauric acid is a fatty acid that’s saturated (no double bonds) and has 12 carbon atoms. 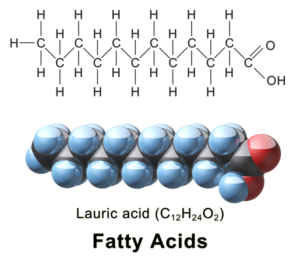 I stopped taking coconut oil completely; I use it rarely nowadays. So I was not surprised to hear when AHA criticized coconut oil.

I discovered a blogger named Hilda Bastian. Her title (and especially her background) won me over.

She does public citizen’s research in Australia and the US. She’s been an epidemiologist for the National Institute of Health. She is also a founding member of Cochrane, a major group focusing on meta-analyses. Meta-analyses are the key reviews of all the studies on a specific topic. There are specific rules used to make sure a proper comparison is done between studies.

As an epidemiologist, Hilda shared the frustration of dealing with issues like coconut oil. She’s a comedian about epidemiology as well.

The title of her blog is “Absolutely Maybe.” In one of her blog posts titled “Saturated Biases: Where the AHA Advice on Coconut Oil Went Wrong,” she criticized the AHA for:

Hilda applied excellent epidemiology to the AHA’s position and found it lacking. She did it in a manner that’s clear, in-depth, and inoffensive.

Here’s another position on coconut oil, this time by a public interest group named Center for Science in the Public Interest. The group has been around for decades and has been embroiled in several political battles.

In its article titled “Coconut Oil Myths Persist in Face of the Facts,” the group focused on the following “myths” surrounding coconut oil then debunked them:

I would agree that there is a point behind those statements being myths. The point is this: These are not proven statements. Calling them myths, however, implies that these statements are utterly wrong. At this point, there appears to be little evidence either way. And I think there are still arguable points about this. Medium-chain triglycerides help, but in a limited way

This is a meta-analysis from the British Medical Journal (BMJ): “Lauric Acid-Rich Medium-Chain Triglycerides Can Substitute for Other Oils in Cooking Applications and May Have Limited Pathogenicity.” It’s in Open Heart, the open-source web version of the BMJ section concentrating on cardiovascular disease.

In this study, researchers said that medium-chain fats in MCTs seem to help as compared to longer chains.

However, they say that MCTs are of limited help but also have limited danger. The message is that you can use them, but they will not be a big cure.

I think they’re right—I use MCT oils every day in my morning coffee. But to say that there’s unambiguous evidence supporting this is too much of a stretch.

How does this study of laurate-rich MCTs relate to coconut oil?

Coconut oil contains about 50% lauric acid, and there were previous observations that “south Asian and Oceanic societies which use coconut oil as their primary source of dietary fat tend to be at low cardiovascular risk.”

Coconut oil as a source of medium-chain fatty acids

Here’s an interesting article by the Asian-Australasian Journal of Animal Science. The title is “Effects of Dietary Coconut Oil as a Medium-chain Fatty Acid Source on Performance, Carcass Composition and Serum Lipids in Male Broilers.”

Researchers pointed out that if there’s too much soybean oil in the diet of male broilers or chickens, there’ll be too much fat in the broilers’ bodies. Researchers suggested decreasing soybean oil by 75% by substituting it with coconut oil.

If these researchers have done that to decrease body fats of broilers, imagine what coconut oil can do to our bodies.

The pro-coconut group would say, “Yeah, but it increases HDL even further,” or “Who cares about LDL, anyway?”

If you look at the actual studies, there’s no measurement of HDL, so the statement that coconut oil raises HDL is not well-founded (at least yet).

The pro-coconut community suggests that the weight of the evidence from intervention studies is consistent with a reduction in risk factors for cardiovascular disease.

As we see, the “science” around coconut oil has been a challenge.

My bottom line is the results are still not clear. “More heat than light” is a good description here.

It’s like many dietary debates, like keto vs. plant-based vs. paleo—there is a lot of emotion, but the actual evidence is not so clear.

If you think science is clearly in favor of saturated fat eradication, I suggest you read “The Big Fat Surprise” by Nina Teicholz. Eight hours of reading this book might be enough to make you at least doubt your assumptions.