Citrulline: Does It Work?

I had a patient who was talking about citrulline for various needs, one of which is erectile dysfunction.

But what is citrulline? Why is it used? Where did it come from? How does it work?

Citrulline was first extracted from watermelon, with its name derived from the Latin word “citrullus” or watermelon.

Citrulline is similar to urea and is part of the urea cycle. The urea cycle has lots of uses within the body, one of which is to take ammonia off amino acids. People who eat too many proteins excrete that much ammonia in their urine.

The kidneys convert citrulline to arginine (or L-arginine), another amino acid. Promoting the release of NO (nitric oxide) appears to be the functional area (if not one of the functional areas) for citrulline and arginine. NO is known for its effect to dilate and relax blood vessels, improving blood flow.

NO is critical to the health of the intima, one of the layers of the artery, the thin endothelial lining that doesn’t provide any structural strength but plays lots of metabolic roles. The more cracks the intima layer has, the more LDL cholesterol can go through those cracks. LDL cholesterol can get lodged if it can’t pass through the media layer. 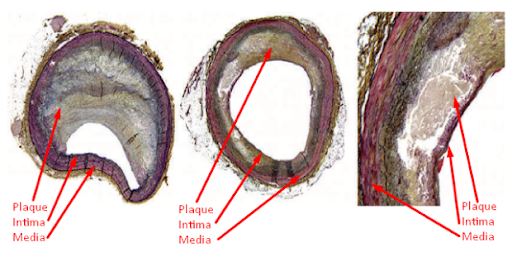 These are pictures from actual patients that died because of a heart attack. Notice the cross-section of the artery: the media (the muscle layer) and the intima (a thin layer). During plaque development, LDL cholesterol can go through cracks in the intima. If there are things like diabetes, prediabetes, or periodontal disease, LDL cholesterol usually goes through the media too and impacts inflammation. Proteoglycans can form, then the LDL cholesterol can no longer go through the media, becoming stuck between the intima-media space. If LDL cholesterol gets lodged, it becomes plaque. Then when our immune system starts “friendly fire,” It attacks that plaque and releases enzymes that start liquefying the plaque. If liquefied or inflamed plaque (we call it “hot plaque”) breaks back through the intima layer, it could form a clot. This clot could kill patients, as most heart attacks and strokes are caused by this clot.

People use citrulline mainly to improve blood flow, like in the cases of hypertension (high blood pressure), erectile dysfunction, diabetes, and diabetic vascular injury. (In diabetes and prediabetes, high sugar levels injures the blood vessels by causing inflammation, as we saw in the previous image.) Weightlifters, bodybuilders, and other athletes also use citrulline supposedly to improve performance.

What does the scientific literature say?

Here’s one evidence that citrulline works. This is a study looking at cyclists titled “Oral L-citrulline supplementation enhances cycling time trial performance in healthy well-trained males.” It was a randomized clinical trial given to some participants. Some cyclists were given a placebo, and other cyclists were given citrulline as a supplement. Researchers measured the increase of NO, and they did see an impact on NO after taking citrulline.

But does increasing NO levels actually improve athletic performance?

Can we say reliably that citrulline works well?

If there is overwhelming evidence, we’d see a lot more use for citrulline.

Do I think it works?

I think there’s clear evidence that citrulline has worked and that it works in certain situations. We just don’t understand all the situations.

Here’s a 2015 editorial in Medical Sports Science that I read, titled “Arginine and citrulline supplementation in sports and exercise: ergogenic nutrients?” The authors showed good evidence that citrulline has worked in athletics, but not always. They talk about evidence in the scientific literature that NO supplements help athletes that are relatively untrained, but not much for athletes that are well trained.

Use the comment section below to tell us what you use citrulline for or if you have some good references regarding the science around citrulline.